“I am innocent of this just man’s blood; see to it yourselves.” With these words the Roman prefect Pontius Pilate turned Jesus of Nazareth over to the religious authorities of the Jewish Sanhedrin for crucifixion. I’m intrigued by Monarch’s decision to title his show “Pilate,” as there’s no explicit Christian iconography amid the clowns, bloodied boxers, and the mythic American cowboys. 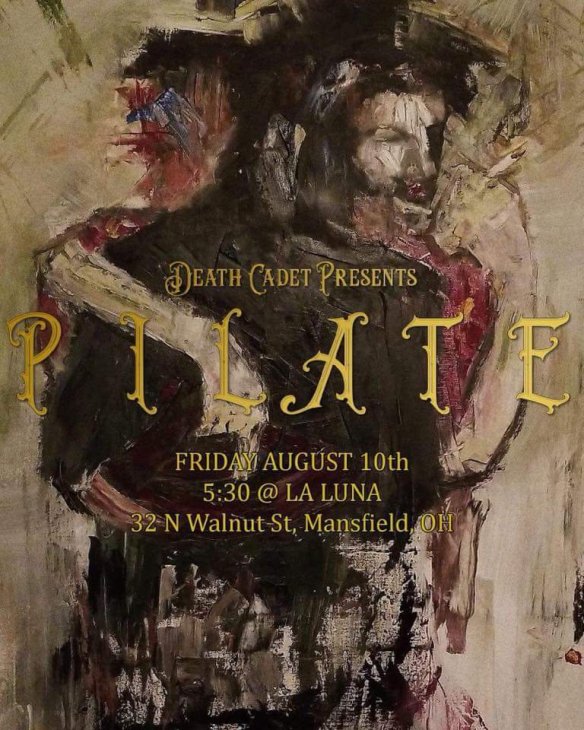 In “Pilate” Monarch combines an illustrator’s sense of character development, storytelling, and clean line work with the brooding and atmospheric impasto work of an expressionist painter. The effect is a midwestern folk aesthetic that nods respectfully to Thomas Hart Benton. In keeping with Benton, Monarch’s Boxer and Cowboy compositions appear presented through a fisheye lens, the figures are exaggerated and the environment askew. Monarch’s figures, however, are not overly rendered in the manner of Benton, but are hashed out loosely in a manner I’d describe as George Bellows-meets-Francis Bacon.

This is where I see the biggest improvement in Monarch’s work of late, in his loose and gestural application of paint. There are still moments in the work where the surface falls flat, but overall the surfaces of his paintings are vibrant and compelling. Narrative content aside, I found myself sidling up to his work, nose to canvas, becoming lost in the color and brushstrokes.

The question remains, what do we make of Monarch’s reference to Pontius Pilate in relation to this constellation of characters? My gut tells me that his cast of American mythic characters are all, in some way, surrogates for the Christ figure, which our world has washed its hands of. I do not mean to accuse Monarch of having a Christian agenda, but I take him at his word that the title of the show is supposed to provide context for this new body of work. Therefore, I look to Pontius Pilate for clues.

The Boxer, as a character, perhaps has the most tenuous relationship to this reading of the work, but if we think of the way in which the movie Rocky IV continues to populate the American imagination, the connection becomes a little more clear. The underdog Rocky Balboa (Christ) against all odds defeats Ivan Drago, who is a surrogate for the leviathan of the USSR (Pontius Pilate and the Roman Empire). In a world of MMA and ribald violence, the mythos of the hometown boxing hero has lost its romantic appeal.

The Cowboy figure is the essential American myth. The stoic individualist, who is outside the law, but whose gunslinging and rabble rousing is always in service of the moral good. This immediately brings to mind Jesus upturning the tables of the money changers in the temple of Jerusalem. Like the cowboy, Jesus harnessed his aggression to make a moral statement against the highly profitable blood cult that had established itself under the guise of Jewish orthodoxy. 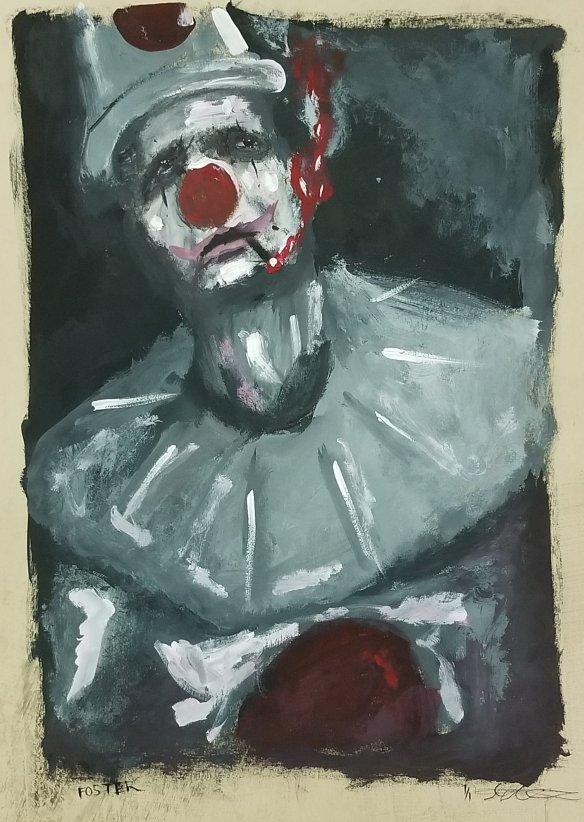 The Clown seems to be Monarch’s go to character and is perhaps an alter ego. Contrary to our contemporary notion of the clown as a goofy actor hired to elicit giggles at children’s birthday parties, traditionally the clown was a mimetic figure. They use parody, mime, and mirroring as a way of critiquing the ruling powers of our social, political, and religious institutions. In this way Jesus was very much a clownish figure, who, contrary to the Zealots of the day who sought violent revolution, sought to neuter Rome’s power from within by holding a mirror to the Jewish religious powers that were acting in collusion with the Roman Empire to maintain hegemonic control over Judea.

Who, then, is Pilate in all of this? I suggest it’s you and me, when we refuse to stand in defense of what is Just. It is you and me, when we sit back and allow the revolutionary figures of our past to be tamed and co-opted by a system of injustice. It’s you and me when we wash our hands of the legacy of, say, Martin Luther King, allowing his revolutionary energy to be diverted away from its righteous cause and into the realm of holiday nostalgia and faux liberation.

The work is not done. The blood of the innocent is on all of our hands. I do not believe that Monarch is championing Christianity, not at all, but I do believe that he is tapping into the importance of myth and story. He is salvaging vital American archetypes at a time when we are desperate for heroes. He is reminding us that the world is made and destroyed by stories, so tell yours, be it fighter, cowboy, or clown. See to it yourself.

1 thought on “Pilate: Myth and Liberation, a review of Thorn Monarch’s solo exhibition”